skip to main | skip to sidebar

Um, has anyone else noticed that Google's gone Saussurean? 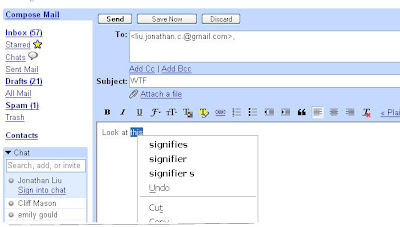 This has been happening for weeks now, but it remains irreconcilable with anything decent or holy, and I fear just by talking about it I will be struck down. Anyways, go to any site that uses Google's spell-checker (gmail, blogger, etc.). Spell a world correctly, then right-click on the word. No matter what word you choose, you will see the following suggestions:

WTFWTFWTFOMFG!? I'm not sure what's the scarier possibility: that this "bug" (easter egg?) has been happening to every Google user and no one has noticed it, or that it's only happening to me (on multiple computers, no less). I repeat: WTFWTFWTFOMFG.

Did she actually just say that?

Elizabeth Edwards, via the Politico, about how her statements supporting HRC's health plan over Obama's do not constitute an endorsement of the former (or a repudiation of her husband):

“If I say I like chocolate ice cream better than strawberry, it doesn't mean either (1) that I like chocolate or strawberry as much as vanilla or (2) that I dislike strawberry. I say what I mean. Hillary's health care plan is closer to what I want to see than Barack's,” she wrote. “As a spouse, it is not surprising that I have a very small change purse of political capital and I have repeatedly said that I was going to use my capital, such as it is, for the issues about which I care and not on an endorsement.”

So, she'll never like chocolate or strawberry as much as she likes vanilla. Glad that's settled. By the way, this was a written email, so like, she saw what she wrote and pressed send anyway.

Blackmail of the Enlightenment

So, Endasher was updating zer Facebook profile tonight when ze noticed the following:

Why, in 2008, are we still forced to acquiesce to the fantasy that religion and politics make up the most "Basic" attributes of selfhood? I had to dig all the way to the "Relationships" tab before actuating the real stuff of identity—that is, declaring that I'm looking for "Networking" (née "Random Play"). This will not do. No, Facebook is not as non-dialectical as it was just a few months ago, but here's predicting Zuckerberg will still be one of the first four or five against the wall.

I also added a drop shadow to my picture! Therefore, I am existent—and accepting friend requests@! Poke, however, at your own peril.

Julia Allison, Eat Your Heart Out 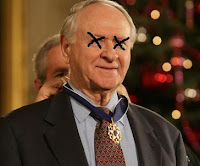 William Safire is running scared, haunted by the specter of the en dash. Crumbling under the evident shame of his foray into "postpartisan" stylistics, he waxes inoffensive this week in a Clinton-tinged bit on "bird-dog minutes" and their rhetorical reappropriation. Fair enough: Safire has realized, or been shown, that punctuation is utterly outside his purview, and he will restrict attention to language as such or face the consequences.

But traces of last week's backfire impregnate the bird-doggery at hand: they circulate, collide, and threaten to implode the whole sorry exercise. As Safire hedges and triangulates, looking over his parenthetical shoulder at the recent farce — "nonpartisan (not postpartisan[!!])" — and welcoming, again within the safety of parentheses, a one-off exchange with his beleaguered copy His refusal to give explicit justification for the hyphen in "bird-dog minute" or, for that matter, in "bird-dog" the verb, would under other circumstances be a refreshing endorsement of his readers' presence of mind — compound adjectives, different usage, etc., etc. — but here it merely throws into relief Safire's meekness, his fear, his outright humiliation and final acknowledgement that one man's syndicated meta-pedantry is another's common sense. editor, he appears more emaciated and discreditable than ever.

Sad though it is to see a columnist of Safire's putative stature, or at least age, curl up in resignation, these foregoing moments mold only the general affect of this latest entry "On Language," not its moment of critical collapse beneath the deferred pressure of the en dash — and his proven inability to cope with it. As he trails off, cold-shouldered by the Clinton camp, surrendering to the (consistently impressive) Dictionary of American Regional English, he foretells the many "dialectical delights" lurking behind the etymology he refuses to investigate. Not "dialectal," linguists' preferred term for all things of or pertaining to dialects, but "dialectical," that philosophical catchall cherished (and, admittedly, abused) by enough of Safire's academic–political enemies to fill the University of Wisconsin several times over. Certainly "dialectical" can refer to dialects, but the word is so colored (overdetermined?) by theoretical currents from Moscow to Frankfurt to the Left Bank and beyond as to render its plain-clothes linguistic application comical, a quiet kowtow to the en dash's transformative promise, which Safire conspicuously flouted last week. But perhaps this is just what the author so quietly aspires to harness.

The en dash, in a selected category of usage, summons a vibrant, polyvalent, and entirely value-neutral dialectic between the terms it links. Whereas the hyphen routinely venerates hierarchy — understood in at least a grammatical sense: prescribed order of words — the en dash levels it. "Singer–songwriter," to take a familiar example, could just as easily, and as correctly, be "songwriter–singer": the terms are on equal footing, and any conventional ordering we maintain is only that — conventional. Singer and songwriter: it is a simple, unmarked pairing. It is infinitely and productively reversible, always in motion or pointing toward its possibility: dialectical. And in those en-dash cases which manifestly do report hierarchy — "master–slave," for example, from Safire's good friend Hegel — the imbalance is no fault of the punctuation, but of the terms themselves. See also "philosopher–king," "work–life balance," "Clinton–Obama": "and," "with," even "versus," but always corralled into a dynamic relationship that demands consideration on its own terms while demanding the aggressive scrutiny of each individual term, its fissures, its overlaps, its vulnerabilities. The en dash is, in this way, the escape route from the ideology presupposed by the catchall hyphen that installs and reproduces and renders unquestionable an entire legion of hierarchies.

Why did he do it? Ever the sober linguist, why not say "dialectal"? Why sacrifice precision; why wander down the tortuous theoretical road of the dialectic? Last week, monkeying with "postpartisanism," Safire sinned upon disavowing a different en dash. His frustration over the phrase "post-baby boom" could easily have been resolved: the en dash can stand in for a hyphen when multiple words are being joined on one side. Functionally, "post–baby boom" is quite apart from the delights enabled in the internal workings of, say, "philosopher–king." But one context of use associatively slips toward the next, and Safire's "dialectical" proclivities this week suggest that he was ready, apprehensive, for this crucial step all along.

Leaving a trail of wreckage on account of his tenuous, overextended work with hyphens, and now jittery at the prospect that this might be his legacy, Safire seeks refuge. This week's bird-dog column is not only the pitiable capitulation of a punctuational know-nothing; it is a cry for help. That help lies in the en dash — help that the hyphen-wise, en dash–foolish Times, strangling expression by the day, seems unwilling to supply.

BREAKING... B. Hussein Obama Wants to Eat Your Puppy

Whoever's running Hillary's oppo department should be fired immediately. Because obviously no one in this country cares anymore about what you inhaled or even insufflated as a boy. But while the interns were paper-cutting themselves through Dreams from My Father searching for crack, everyone seemed to have missed the shocking admission on page 37 of the memoir, recounting Barry's childhood in Indonesia:

...I learned how to eat small green chili peppers raw with dinner...and, away from the dinner table, I was introduced to dog meat... 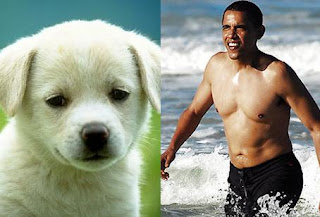 !!!!!! Apparently, Snoopy tastes "tough." I'm just as tolerant as the next guy, but America is not ready for a dog-eater in the White House. Of course the media's not asking the tough question on this. But make no mistake: a vote for canine-fusion cuisine is a vote for the end of the Enlightenment. Ugh, I can't look at him now without seeing the tail wagging in his disgusting flabby stomach. How could you?

Are you there, Daddy? It's me, Matilda. 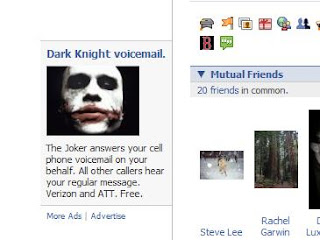 Fit for a Meme.

Associates of the 'dasher know that for months now, yours "seriously profound" truly has been periodically crowing about HRC's uncanny evocation of Eva Peron, or at least the Madonna version I've seen dancing once with Antonio Banderas. Surely, I thought, someone would pick up on the resemblance to the similarly blond, two-for-the-price-of-one, mostly fascist, vaguely tubercular former first lady of Argentina. [The difference being Evita actually achieved something resembling universal health care.]

But even as Hillary cleverly tweaked the old Rice–Webber standard for her "Don't Cry for Me [Crying for You], New Hampshire" routine, the MSM ignored it all, seemingly content with the obvi casting of Obama as Jesus Christ Superstar. (Ron Paul is Cats.) Well, thanks to an offhand and off-putting comment from a Clinton aide-de-camp, the story's finally hit the big time this week:

Since said MSM has to come up with silly reasons to point out the fact that one thing looks like another thing, the idea in the above is that Latinos, grown up in a culture of dynastic lady leaders like Evita, are predisposed to support Hillary. (Why this hasn't made her poll numbers higher among gay men and 16-year-old girls from New Jersey, no one could say.) Also, like most things Clinton nowadays, it's both racist and illogically so: last time I checked, wasn't the stereotype machismo?

Well, I suppose those people do really love their mothers. Wait, that's the Italians. Which, incidentally, is what Madonna is. Oh, swarth is so hard to parse!